I know Matt and Morgan from Thread Theory have a discount on their Strathcona pattern and since I've made this pattern many times I thought I'd share my versions. While this pattern is designed for men, my first make resulted in one of my favorite loose-fitting shirts ever and many versions followed. Some are still in progress, waiting for mojo (=I can't bring myself to cut the welts, as you'll see below) or for a change of thread color on the overlocker. While I've never blogged about these makes, I did try to take some pictures. Some pictures are rather old, and some are selfies in front or our mirror (dirty-mirror selfies used to be legit blog pics a few years ago!), but it will have to do.

Following my first try, I used the only knit fabric in my stash at the time to make this version: 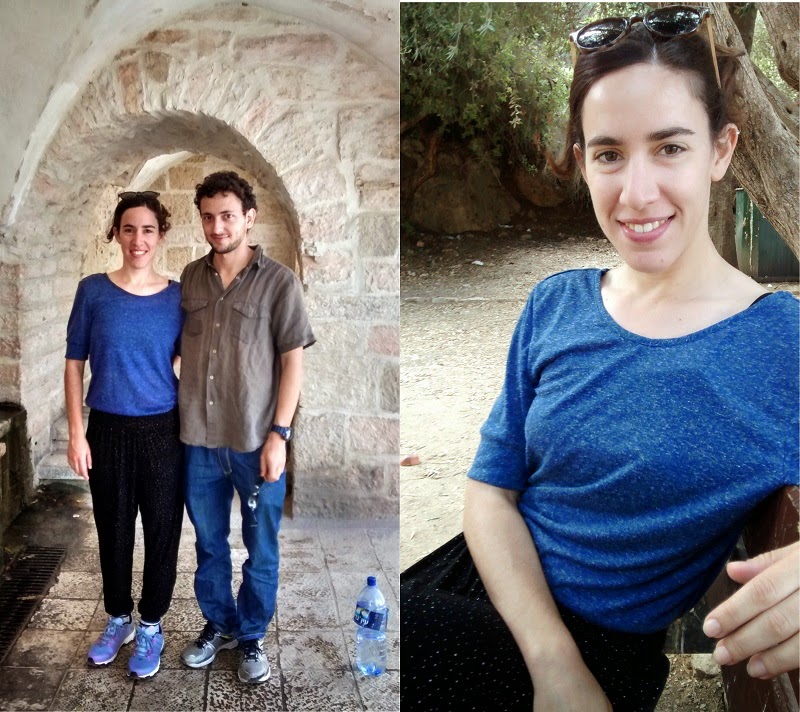 The fabric was bought to make D a Strathcona but I really wanted to make another version for myself and the only garment he ever asked me to make him is a button down shirt (I'm waiting for a pattern so D is still waiting for a shirt), so I went for it. This version is still un-hemmed but I wear it all the time. I added sleeve bands and narrowed the sleeves, and I like the puffy look of it. I started with size M but changed the shoulders and narrowed both the back and the front, so I have no idea what size it is now. D is wearing his jeans version of the Jedediah pattern, btw.

I also played with the back neckline, tried to lower it considerably but the end result is more of a low boat neck rather than the design I was going for: 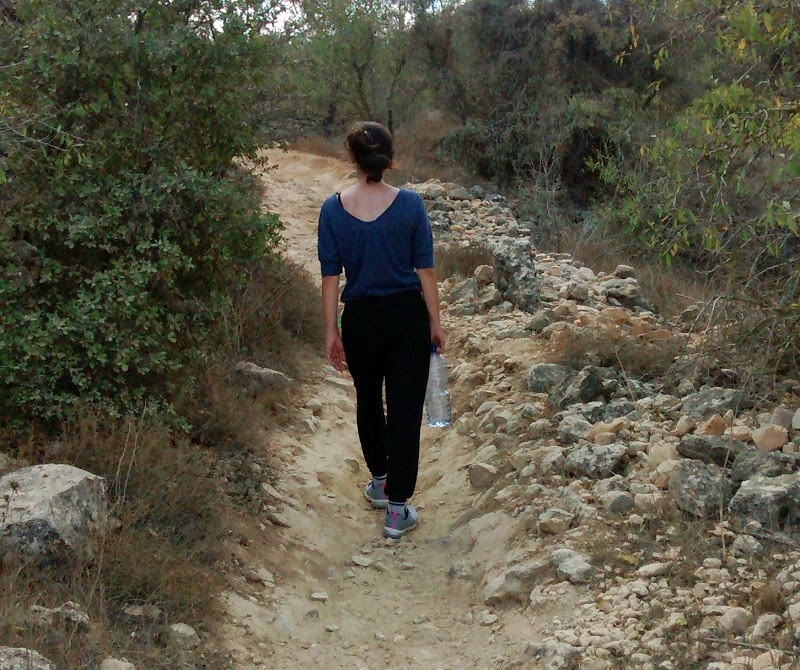 Even though I wanted a lower back neckline I still like the end result because it's low enough to be irregular but high enough so the bra doesn't show. The pictures were taken during a hike we took, so they demonstrate how well this tshirt fits in my wardrobe.

Following this successful experiment I went on and made another one: 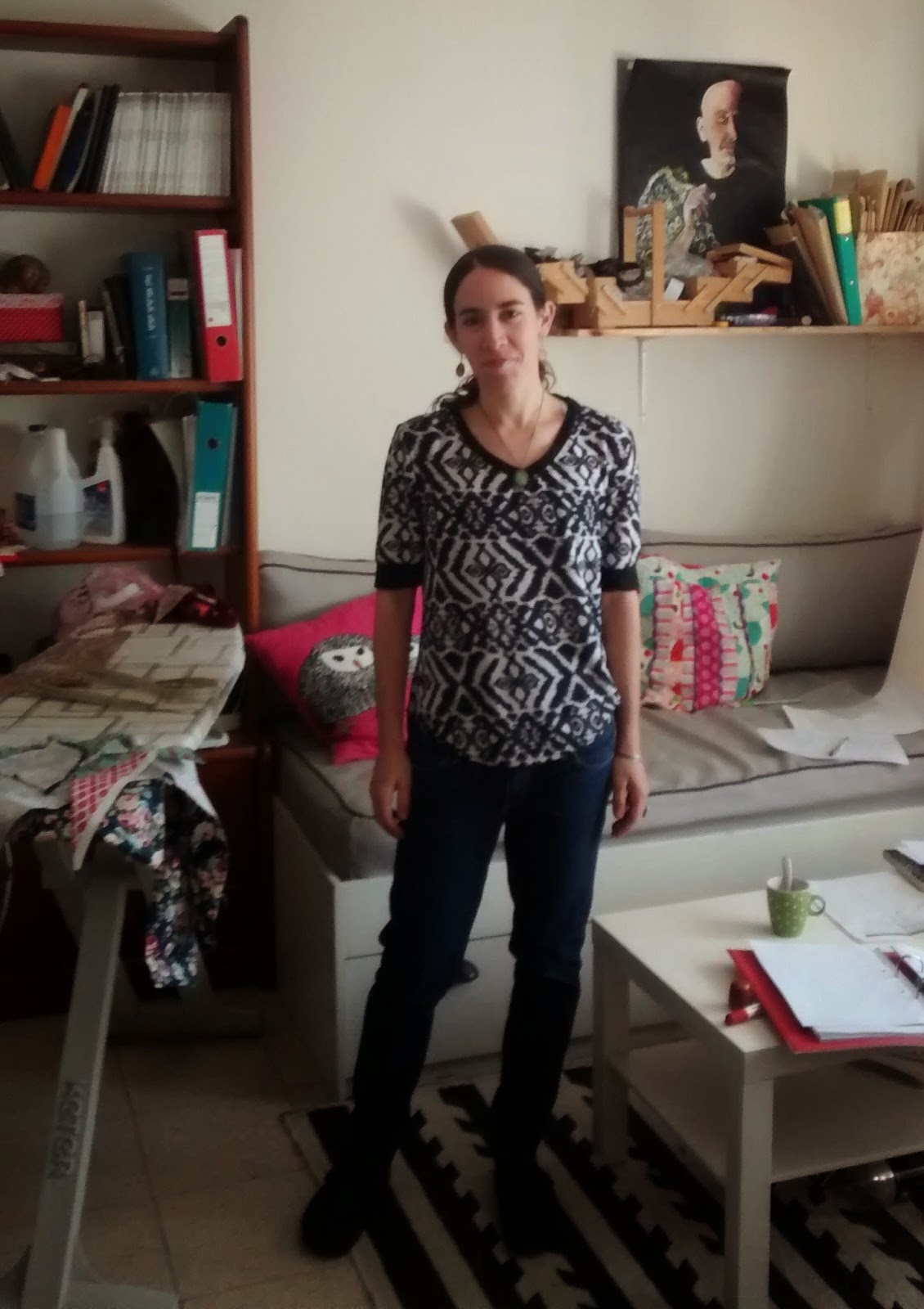 I tried to avoid unfortunate pattern placement, but got into some trouble when I realized the pattern was completely off grain. It took me a while to identify the problem, it appears that the vertical and horizontal lines don't meet in exactly right angle. As a result I couldn't win this game and ended up with a weird pattern going diagonally. I got used to it after a while, and people don't seem to notice it anyway. Both tshirts are in constant rotation and have the perfect silhouette for dance lessons (I dance flamenco).

At this point the weather started to change and the days became colder (yep... It was 6 months ago). Considering I had only a few winter clothes (have no idea how this happened) I had become an overlocker monster and started sewing knits as if my life depended on it. I went to the textile district with the sole goal of purchasing enough knit fabric to create a  variety of winter clothes so I can lengthen my laundry cycle (my life-goal is 2 weeks, currently at 10 days so I'm getting there!). I wanted to play with the Strathcona and see how it would look in different types of fabric, and also expend the variety of materials with which I work. For the next make I tried a sweater knit in purple, and the result is still one of my favorite garments and is in constant rotation: 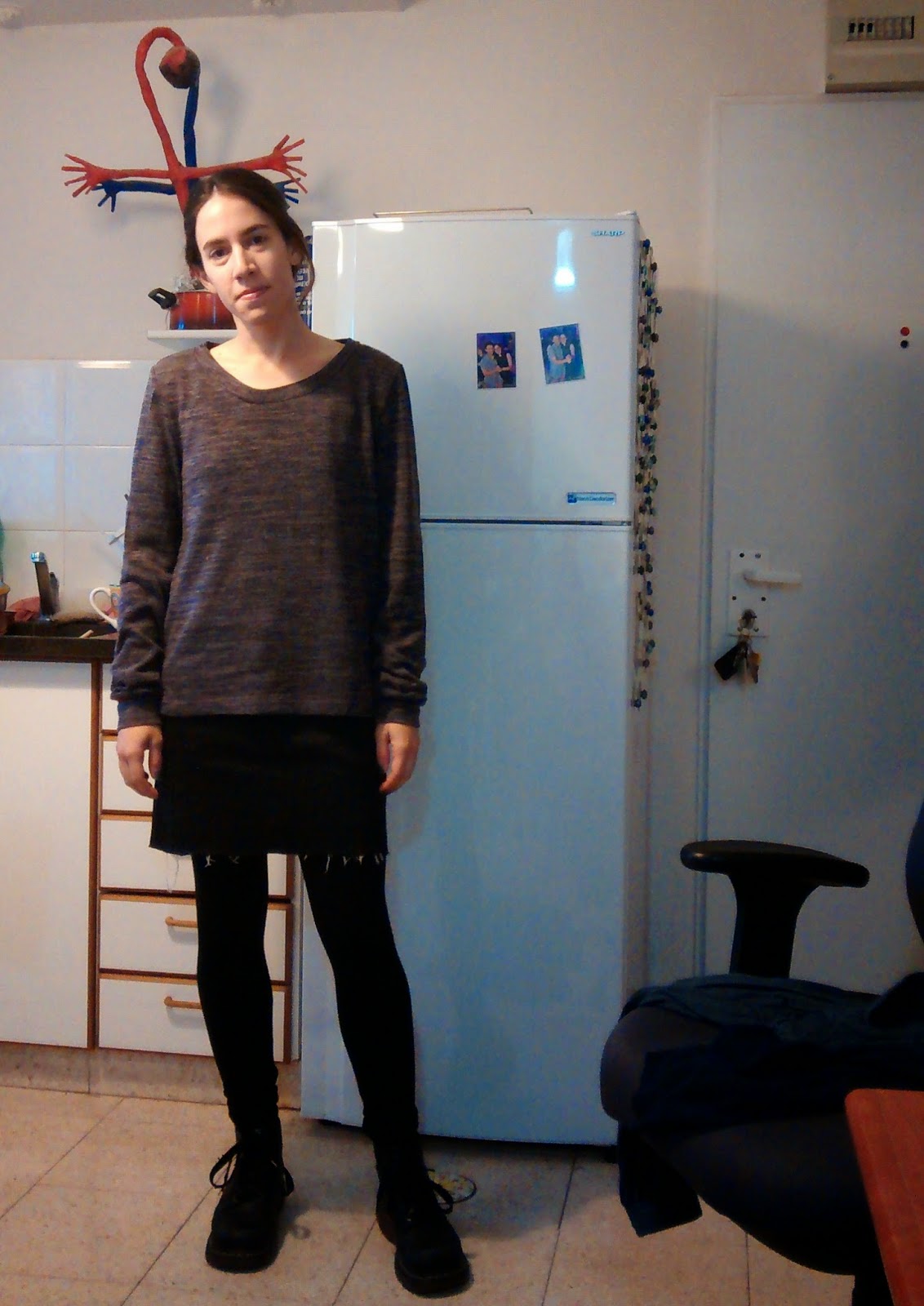 Worn here with my moss skirt, a garment I finished ages ago but never written about, and secret pajamas in the form of fleece leggings. Other accessories are a grumpy face and tired eyes, it was cold, early in the morning, and a work-day, so... I'm not giant, btw, our fridge is rather small. I love sleeves in unusual lengths so for this version I used the original sleeve length of the Strathcona, which is super long for my frame. I added cuffs and I like the extra material bunching around my wrists. The cuffs also help in preventing wind from freezing me on my way to work so it's a win!

After yet another successful version I wanted to push it, test if I could hack the pattern and create raglan sleeves.

The first result of this experiment is this grey sweatshirt (if you look close enough you'll notice I'm wearing it over the purple version, and a red version which was a fail): 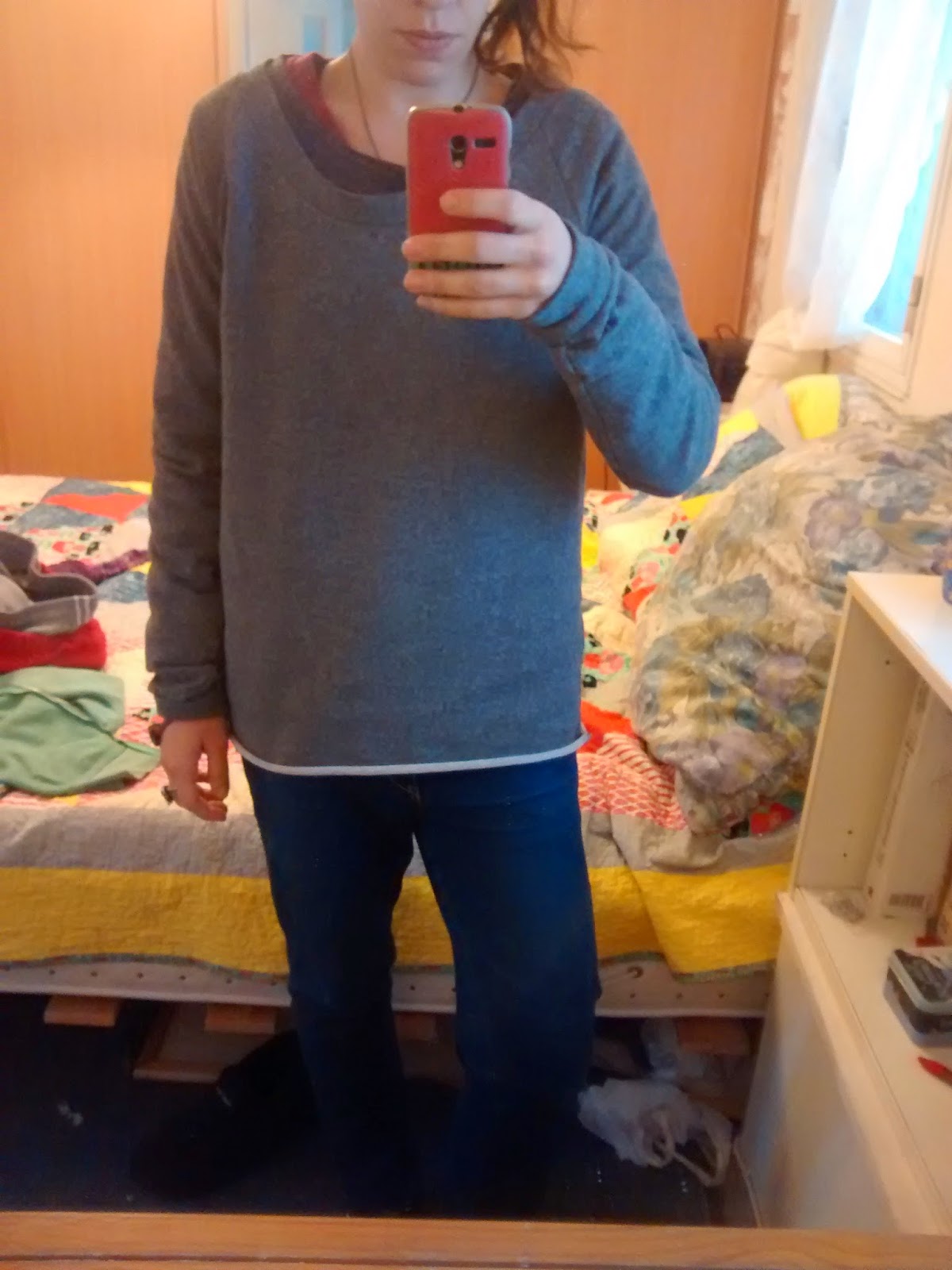 When I first tried it on, I felt I was wearing an armor rather than the cuddly grey sweatshirt I was going for and I didn't know if I'll keep it or give it away. After 3 months of constant wear the fabric had softened considerably, and I finally hemmed it. The fabric is a bit strange: it has almost no stretch (except for the mechanical stretch of the knit), and it unravels a bit which is very unusual for a knit fabric.

To test the raglan again I tried another version with sweater knit: 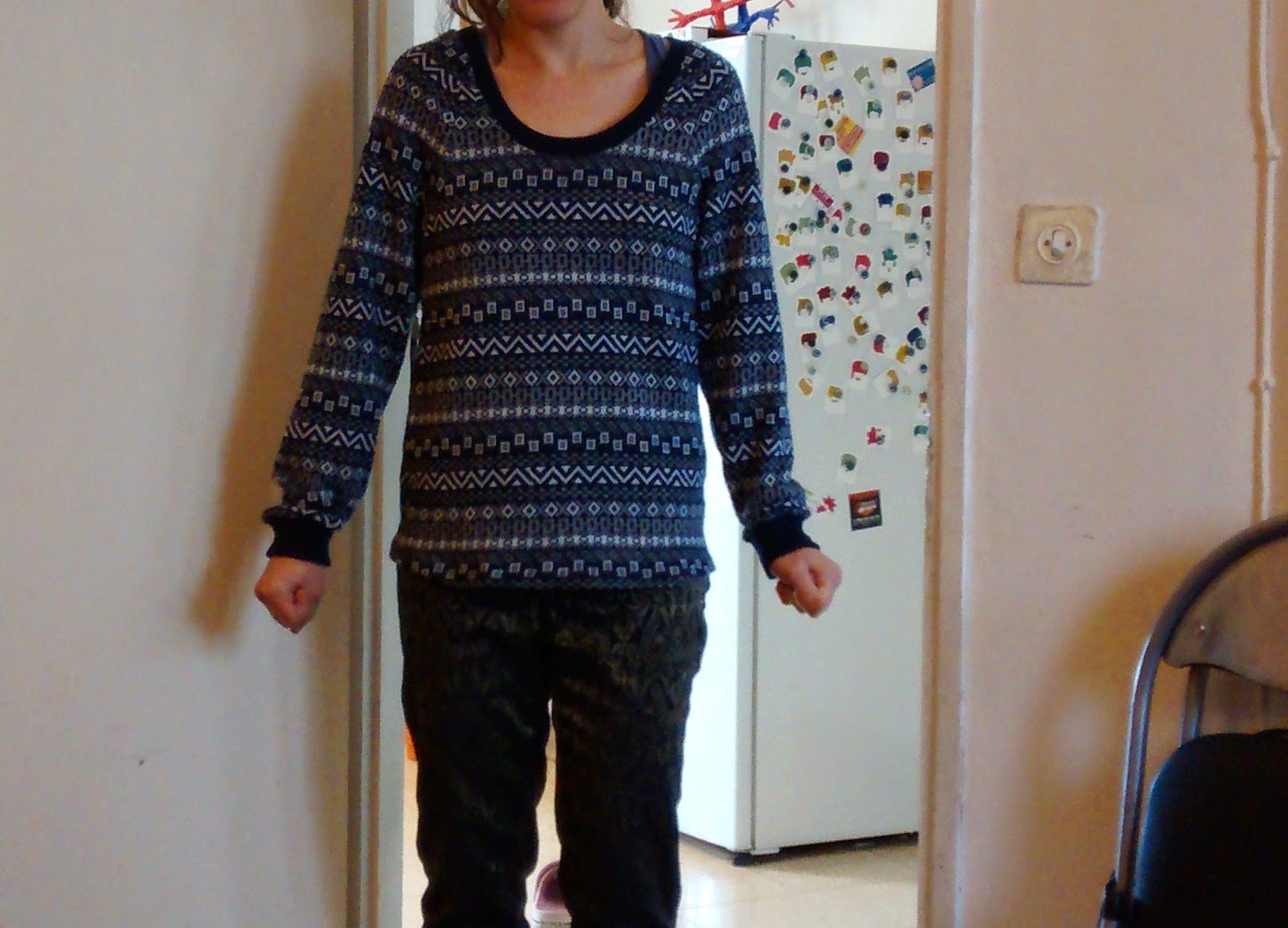 I used matching ribbing (all the starts aligned and I found matching ribbing!) and matched the pattern across the raglan seams. I wear it and I like it, but not as much as the purple version. in hindsight set-in sleeves could have been a better choice for this fabric. Also I'm freezing in this picture, it was taken during a snow day while I was sewing brocade ultimate trousers and wanted a picture to help me judge the fit. It's a story for another post though.

After experimenting with the raglan variation my verdict is - next time I'll use the Linden pattern. Jen is an alchemist when it comes to everyday clothes and I want to try her raglan pattern!

I did however tried another hack of the Strathcona. Using my raglan variation I wanted to make a bomber jacket. I had a blue version of the grey fabric in my first raglan try and floral neoprene in my stash, both perfect for this experiment. I hacked the raglan some more, and while both version are still in progress I think I'll like the end result: 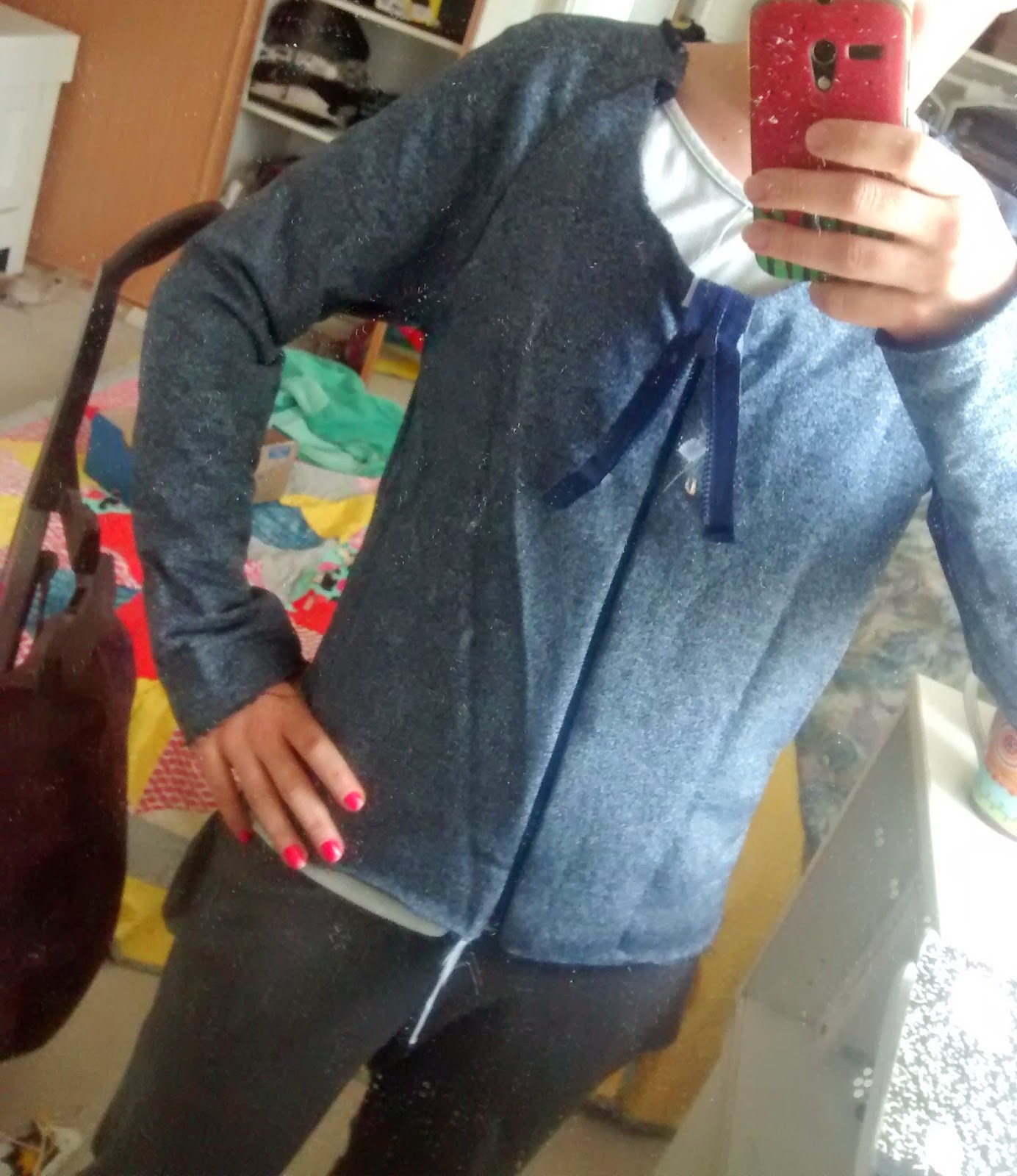 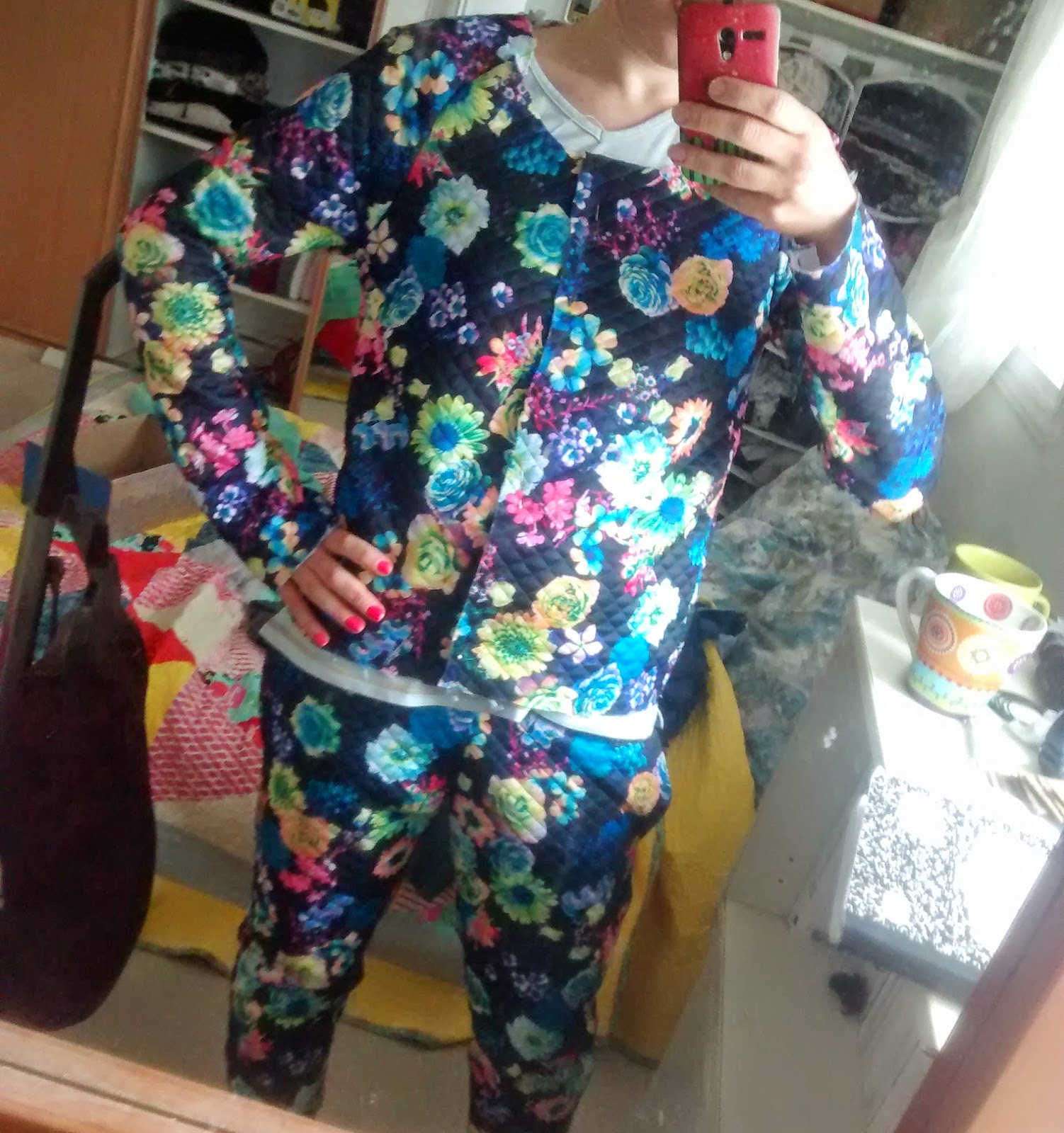 both versions are worn here with go-to knit pants, a pattern I'll review soon. In order to achieve better fit across the shoulders I added a shoulder dart, and narrowed the front some more. At this point there's barely any resemblance between the current pattern and the original Strathcona, I guess you can call it pattern evolution.

I'm stuck here, because I can't decide on the welt pockets placement. Additionally I want to draft the pocket bags in such a way they'll be caught in both the zipper seam and the bottom band seam. I still need to draft the facings and decide what to do with the lining. Both versions are stretchy, and I don't want the lining to compromise mobility. I think I'll do a partial lining - only line the body of the jacket and leave the sleeves un-lined. I'll add a pleat at the back to increase mobility. I'm in no rush, though, and don't mind having a few UFO's sitting around waiting for my mojo. I rather take my time than end up with a garment I'm not happy with.

The weather is colder than expected, but my sewing list includes a couple more versions of Strathcona with short sleeves and cuffs once I find fabric I like. I love everything about this pattern and am looking forward to future variations.

Please tell me I'm not alone here with my womenized Strathconas!