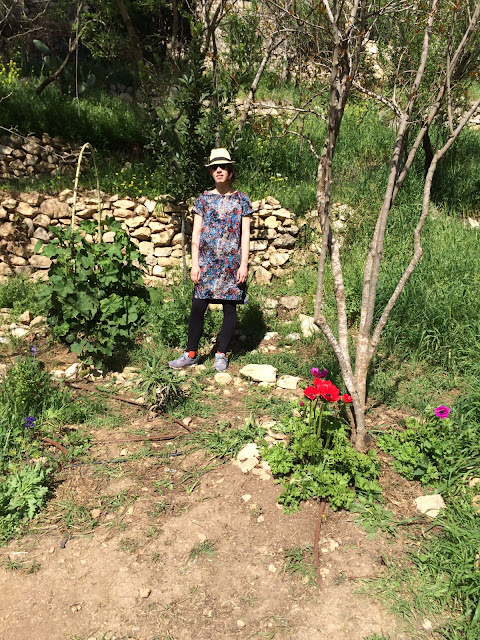 A few days ago I had an episode of anaphylaxis, a severe allergic reaction to something. I have about two episodes a years, around this time when all the flowers are blooming and most allergic people go around glued to tissue and antihistamines. Despite the fact I'm used to it by now, whenever it happens and I need to inject myself with epipen I get puzzeled and confused. I know it takes me four days of rest until I recuperate from anaphylaxis so I try to convince myself it isn't really happening. Well - it happened, and as always it happened late at night while I was alone. 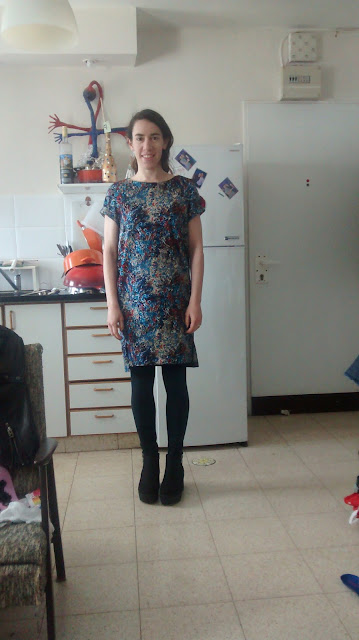 I spent the following two days in bed feeling sorry for myself with only short breaks from sleeping. By the end of the second day I felt I had to do something productive. I have the Wyome pattern by Named on the list, and have already made the first muslin, but making a second muslin wasn't really appealing to me at that point. I wanted immediate satisfaction!

So I took out the fabric I kept for the Inari dress and started cutting it.

The Inari pattern by Named is well documented and very popular, and initially I thought the coccun shape will not suit my figure. I'm flat chested and my legs are not my best feature, so on paper this should be the worst choice for me. But I received printed cotton from a friend's mother and thought the Inari was the best pattern to showcase the unique print. Also I notice my wardrobe lacks "evening wear", something more special than jeans and a button-up, but not too dressy. Something I can reach for when we go out for coffee and such. At the same time I dislike fitted garments, especially when dinner is involved, so the shape of this dress is perfect for such a wardeobe gap.

I muslined the pattern a few weeks ago just so I can be sure of the size. I went with 36 despite my flat chest and thought the size fitted me well. For this version I haven't adjusted the pattern and it fits well as is, but for future versions I'll go down a size. Initially I thought a small bust adjustment will do the trick, but after wearing the dress during a hike I understand the dress is overall too big.

This is is the second pattern I make by Named and again I think it's a great success! I still haven't decide about the shape, though. I like it but I'm afraid people will think I'm hiding a bump... We'll see if I reach for this dress in the future, and if so, if I like the way I feel while wearing it.

When assembling the PDF I find that not all lines meet, but when assembling the dress itself all notches correspond well to one another. Another small complaint I have is that the pattern pieces themselves hold very little information regarding how many to cut for each version, and even the foldlines aren't marked. I would appreciate more information on the pattern pieces so I wouldn't have to look at the instructions so often.

On the other hand, I love the way this pattern comes together. Unlike other companies that leave the decision regarding seam finishes to the seamstress, Named instruct you when to finish the seams resulting in a very neat finish. I followed their instructions and used my serger to finish the seams. While I usually prefer French seams on woven garments, I love how flat and simple open serged edges are. One reason to putting off this project was that I couldn't decide whether I wanted to try French seams or just go with the instructions. At the end despite using a non-matching thread (I only have 3 colors and threading my serger with black wasn't going to happen that day) I like the neat result.

For the neckline I used facing rather than binding. The pattern has both options, but I was intrigued to see how well a facing would behave. I haven't installed a facing in a long time and wandered if I could achieve a better looking facing now that I notice things like grainlines, notches and understitching...

I'm happy to report the facing behaves well, despite some miss-handling on my part (I didn't fused the facing, mostly because I hate fusible interfacing, and I thought the cotton can hold the shape well).

I've only worn this dress ones, because I intend to wear it to my cousin's wedding two weeks from now, and I enjoyed the overall feel. Again my only concerns are with size being too big and the lack of shaping around the waist. I know it's a very popular silhouette but I don't have the best body image, and rally afraid someone will ask me if I'm pregnant.

It has just occurred to me that maybe on other parts of the world people are less up front with this line of questioning? In Israel people are known to be really nosy, especially with young couples. I'm very conscience of my body and so I can easily get offended when someone stares at the wrong parts. Let's see if I follow through with the plan and actually wear it to the wedding, or look for a last minute replacement (or a belt!)

What do you think? Do you wear cocoon style garments or so you think this shape should be used solely for maternity wear?
Please tell me you would never ask a woman if she's pregnant because of what she wears!
Posted by Roni Arbel at 4:55 AM 2 comments: